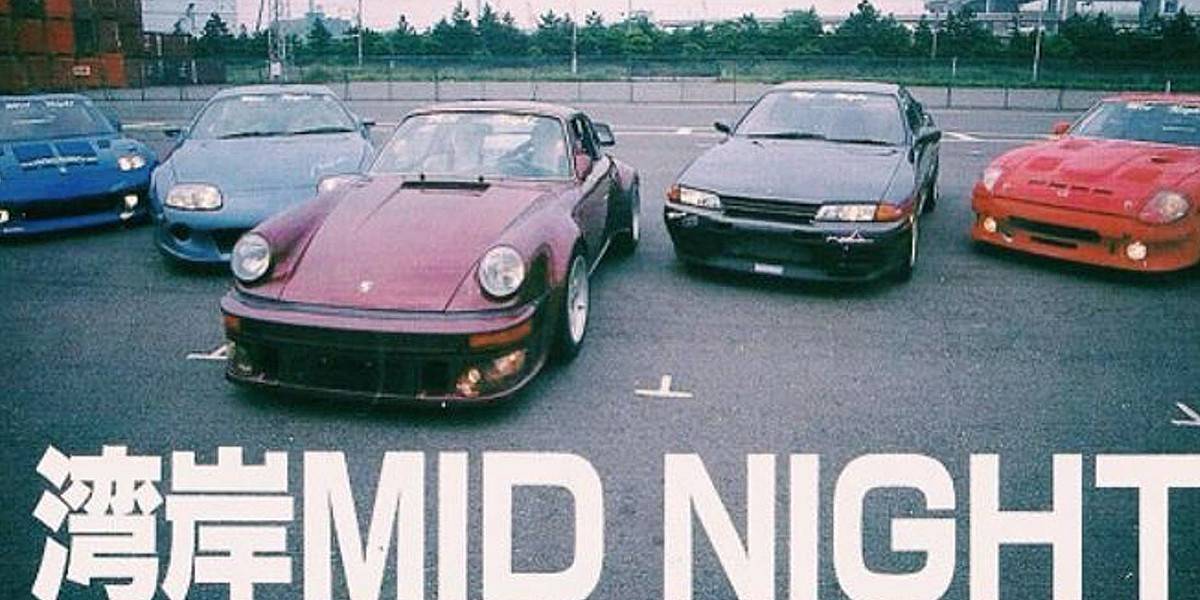 Midnight club, also known as Middo Naito Kurabu was formed in April of 1982 (despite most sources mistakenly claiming 1987). It’s best known for racing Tokyo’s Shuto Expressway at night. Midnight club became notorious due to its members being elite drivers with highly modified cars, being a member of Midnight Club was symbol of high status in street racing culture.

Being accepted in the club wasn’t easy – you had to prove that you can keep a pace of at least 260 km/h (160 mph) for extended periods of time and had to do it in a safe manner. To most regular people it’s inapprehensible how doing more than 3 times the speed limit might be done in a safe manner but it’s possible if you are skillful driver that doesn’t overestimate his skills, have good situational awareness and don’t take unnecessary risks. This was Midnight clubs gentlemen’s code – not to endanger innocent civilians or other racers with their actions. If you ever did something that endangered others, you would have been kicked out of the club immediately.

If you were good enough you would become apprentice member and would have to attend every meeting for a year – only 10% of them would end up becoming a proper member of Middo Naito Kurabu.

Club maintained anonymity policy – members could refer to each other only by their first name and it was forbidden to reveal personal information about yourself like your profession. Only two member identities have been revealed: driver of a Mazda RX7 FD was a property developer and a driver of Nissan Skyline R32 GT-R ran a car dealership. It’s rumored that some of the members (perhaps even founders) are owners and/or founders of some of the largest tuning companies in Japan.

Since Midnight club was founded before internet or mobile phones were available meeting locations and times were revealed through innocent looking adverts in local newspapers.

Blackbird aka Yoshida Specials 930 is the most famous car from Midnight club and for really obvious reasons – it’s the fastest one and cost insane amounts of money to build. Blackbird is a heavily modified Porsche 911 Turbo (930) with 3.6 liter turbocharged flat-six engine that produces 700 bhp. Rumors say that owner spent $2 million modifying it, which sounds like an absurd sum but building a refined machine that can maintain 350 km/h (217 mph) reliably for 15+ minutes wasn’t cheap back in mid 90s (and it still isn’t!). The car is still alive and well!

ABR-Hosoki Fairlady Z S130 was another famous car of a Midnight Club member as it was the main rival to the Blackbird. It started its life as 1978 Nissan 280ZX which became a show car after being modified and eventually found its way to wangan. It has 680 horsepower and is tuned for racing at 330 km/h (205 mph) however it can do up to 348 km/h (216 mph). There is a rumor that it has beaten Blackbird on the wangan, however there is no way to know for sure.

Manga/Anime series Wangan Midnight aren’t based on but are inspired by Midnight Club and its two most notorious cars: The Blackbird and ABR S130Z. The story is about rivalry between two Wangan racers, Akio Asakura who drives Nissan S30/Datsun 240Z (inspired by the ABR S130Z) and Tatsuya Shima, who drives Porsche 911 Turbo 964 (inspired by the BlackBird).

The end of era

On a friday night of 1999 around 3 am members of Bōsōzoku biker gang were messing with and scaring drivers of wangan and as it happend members of Middo Naito Kurabu were racing there. Bikers forced Mid Night Club members into high traffic area and then interfered with them causing a chain-reaction crash in which two of the Bōsōzoku bikers died and six innocent civilians got injured.

Gentleman’s policy of the club meant that if someone was hurt by their actions it should disband. You could argue that it wasn’t really their fault and that Bōsōzoku bikers caused the crash, but their strict moral code is one of the reasons what made Mid Night Club so notorious. Safety was a number 1 priority for them and if someone no matter directly or indirectly got hurt due to their actions they had failed at it.